Award-winning Thailand eco-resort Faasai Resort and Spa invites visitors to try the indigenous fruits of the region – especially the king and queen of fruits - durian and mangosteen. The resort is located in the world capital of durian – the lush province of Chanthaburi on Thailand’s Southeast coast, which is the biggest durian producer in the world. Visitors flock to Chanthaburi during the harvest season in May and June to sample the distinctive fruit. 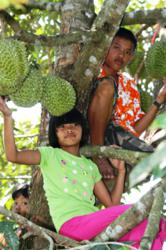 Chanthaburi, Thailand (PRWEB) May 29, 2012
The owner of Faasai Resort and Spa, Bronwen Evans, says the resort wants to promote the natural wonders of the region and so has established its own forest garden, where it is growing tropical fruits, local herbs and rare local plants amidst beautiful indigenous trees, palms and tropical flowers. She says the rich, diverse flora of the local area includes many indigenous fruit trees such as durian, mangosteen and rambutan as well as rare species such as the moon tree, which produces fragrant fruit similar to persimmon.
“The durian is the most exotic and spectacular fruit of Southeast Asia,” Bronwen says. “Its distinctive character is unlike any other fruit in the world and so we have visitors from as far away as Hawaii during the season.”
She says the trees can grow into forest giants up to 40 meters tall and they make a spectacular sight when covered in fruit.
“The fruit is the size of a football, is shaped like a curled up hedgehog and is covered in thorny green spikes. Inside there are plump kidney-shaped segments of golden or creamy fruit, which have the consistency of camembert cheese and a taste that varies from egg custard to caramelized onion.”
She says durian is hated by some because of its penetrating odor.
“This was important for the wild trees as it attracted animals from across the forest to eat it and spread the seeds. Although some people don’t like the smell, it has also added to its mystique.”
One fan of the fruit was the renowned explorer and botanist Alfred Russell Wallace, who discovered it in Malaysia and wrote about it in his book The Malay Archipelago: The Land of the Orang-Utan, and the Bird of Paradise.
”The more you eat of it, the less you are inclined to stop…to eat durian is a new sensation, worth a voyage to the East to experience,” he said.
Visitors to Chanthaburi can readily buy the fruit at roadside stalls while it is in season and Faasai Resort and Spa can also arrange visits to durian orchards. They have included durian trees and mangosteen in their orchards at their nature sanctuary White Water Lake, although Bronwen says it will take a few years for them to mature. She says she has planted unusual durian such as puamany and gan yow from seed as they are becoming increasingly hard to find because commercial orchards mainly concentrate on one or two varieties.
Although many hotels ban durian from their premises, durian-lovers are welcome at Faasai Resort and Spa as it has airy terraces and balconies where guests can eat the fruit outside while the skins and seeds are collected and used as compost.
About Faasai Resort and Spa
Faasai Resort and Spa is a 14 room eco-resort at Kung Wiman, Chanthaburi, Thailand about 200 kilometres southeast of Bangkok. The resort is nestled into a forest covered hill amidst tropical gardens. It overlooks the mangrove-fringed Kung Kraben Bay and is a ten minute walk from Kung Wiman beach.
Awards won by Faasai Resort and Spa
Best Small Hotel Thailand Green Awards 2011
Green award and special award for cultivation and use of herbs and spices from the Governor of Chanthaburi 2011
Outstanding service to the environment and nature in the Eastern region – Thailand Boutique Awards 2010
Best Small Hotel Thailand Green Awards 2009.
Runner-up in the budget category in the 2008 Wild Asia Responsible Tourism Awards.
Posted by Unknown at 14:26